I am a grandmother paddling alone over 2,500 miles from Maine to Guatemala. Along the way I will be:
- telling the story of the children who live in the Guatemala City garbage dump community
- honoring their entrepreneurial mothers
- talking about the success of the Safe Passage model school and
- raising funds for additional grades for the school.

Back Home in Maine

I've been home for a week now, and am getting back to catching up on the blogging.  The next blog will be on the sailing expedition, and then one on the wonderful celebration in Guatemala.

Thank you to all who helped me and Quick update

Dear Friend,
It was so good to meet you during the Kayak for Safe Passage Kids Expedition from Maine to Guatemala.  I am finally in Guatemala, and want to give you a quick update on the expedition.
Read more »
Posted by Deborah at 3:18 PM 1 comment:

I finally arrived in Guatemala!  There are so many stories to tell of the adventures onboard SV Polaris with Bernie Horn and the crew who all volunteered so much of their time for this trip, bringing me and school supplies down for Safe Passage.  And the welcome in Guatemala has been so moving.  On Monday I have a media day and Tuesday is the formal celebration.  Once I am back in the US, I will catch you up on all of the stories and photos.

Now I am still trying to get rid of my "sea legs" that have persisted for way too many days!  Guatemala looks different when it is constantly swaying and rolling.  I keep thinking it it another earthquake.  I'm heading out to try to walk it off.  Don't want to have the drunken sailer walk on TV.  Not quite the right image for Safe Passage.

Exciting night.  Engines overheated.  Trouble shooting suggested water intakes for  cooling the engines.   One question was whether the engines had run to long while hot.   Would they restart once the water was getting to them?  Decided to wait for daylight, anchor in shallow water and send someone under the boat to unclog the intakes.

Fortunately the winds were favorable for the 9 hours we were without engines.
It was magical quietly sailing along in the moonlight.

By morning the guys came up with a plan to unclog by crawling down into the engine compartment, and taking apart the water intake system.   Once they got it apart,  water started coming into the boat.   But they were ready with a stopper plug.   They were able to push the debris through right before putting in the plug.

Now all is well and we are zooming among under sail and engines.

Life on the water is never boring.   I love being around competent people who can think through problems, and have the tools to make things work! 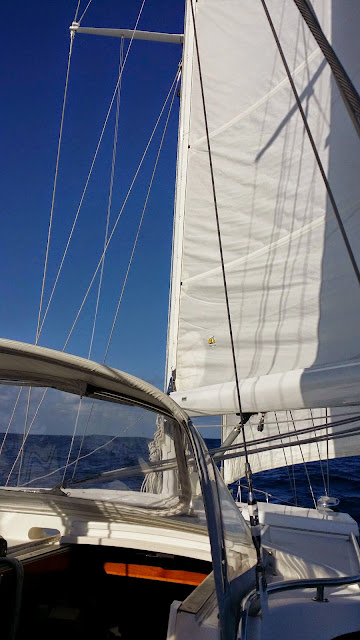